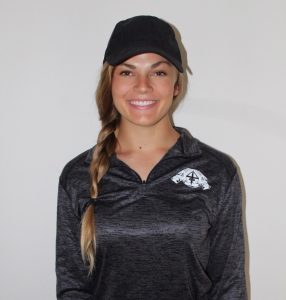 Jillian McVicker is a professional goalkeeper out of Metuchen, NJ. She has trained with PBGKTS since she started goalkeeping at age 12. At the club level, Jillian played for the Pennsylvania Strikers, where her team won 8 state titles, 3 regional titles, and 1 national championship. In ODP, her team won the national title and she received the Golden Glove Award as the most valuable player.

Jillian continued her career to the collegiate level at The Ohio State University. During her time there, she was a four-time Academic All-Big Ten recipient and Scholar-Athlete, Big Ten Tournament Champion, and the Big Ten Defensive Player of the Year. Jillian graduated with a dual degree in Communication and Journalism, with a minor in Media Production and Analysis.

Last year, Jillian played her first professional season with CFF Olimpia Cluj in the UEFA Women’s Champions League, where they made it to the Round of 32. She faced players of Olympic and World Cup caliber from around the world.

Jillian looks to continue her professional career in the Icelandic Premier League this spring.

“Having Jillian on staff is a very rewarding experience for me, personally.  I have trained her and mentored her over her career and she has developed into a tremendous young lady whose personality exudes positivity.  This quality combined with her already vast playing experience makes her a valuable addition to our staff.”

Send Us an Email