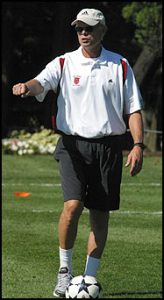 "Paul is a master teacher, coach and mentor for goalkeepers of all ages who aspire to be the best they can be."

For over 20 years, Paul Blodgett was the Goalkeeper Coach at Rutgers University, which at the time was perennially one of the top Division I Collegiate soccer teams in the country. Paul has since created the Paul Blodgett Goalkeeper Training School, LLC, which offers the best quality training for goalkeepers in the State of New Jersey. Paul has risen to this level through years of dedication in learning the position and presenting it to goalkeepers in such a way that it commands results and helps the athlete to become the best that they can be no matter the level of the competition.

In 2001, CollegeSoccerNews.com recognized Blodgett as one of the top assistant soccer coaches in the nation through his dedication at Rutgers University. He was the Director of Goalkeeper Training at the Bob Reasso Soccer School, Inc. While at Rutgers, he worked with three All-Americans: Saskia Weber (USWNT), Billy Andracki (APSL/NPSL/A-League indoor/outdoor professional) and Jon Conway (MLS professional player and GK Coach). Coach Blodgett is presently an Assistant Coach with TCNJ's (The College of New Jersey) women's program, one of the top collegiate programs in Division III; Paul has produced three All-Americans in a row at TCNJ: Kendra Griffith, Jess Weeder and Nicole Dipasquale. He has been with the program for over 12 years to date. Paul was recently selected as the Technical Director of Goalkeeping for NJYS, overseeing the GK curriculum and development for both the boys and girls in ODP.

His impressive list of high level goalkeepers now includes (in addition to the previously mentioned): Karina LeBlanc, Canadian Women's National Team Goalkeeper, Karen Bardsley, Goalkeeper for England's WNT and he has done work with Jillian Loyden of the USWNT and Casey Murphy, former Rutgers standout and now presently playing professionally, as well as, with the USWNT U23’s! Paul has been a part of Championship teams at the professional level with WSL Champions, NJ Wildcats and Sky Blue FC during the inaugural season of the WPS. Paul has worked with many other professional keepers such as, Billy Gaudette (MLS/NASL), Ian Joyce (MLS/England), Neal Kitson (MLS/England/A-League) and Bryan Meredith (MLS/Sweden). Paul is the goalkeeper coach for several club organizations and high school teams throughout New Jersey.
Throughout his career, he has trained literally thousands of goalkeepers at all levels - from youth right up through the professional ranks. Today, many of Paul’s former GK’s are now successful goalkeeper coaches carrying on the tradition of excellence.

The PBGKTS goes well beyond training and drills, instead providing a full spectrum approach focused solely upon the goalkeeper position, providing a platform for the complete training for athletes playing the position. A solid leap beyond standard practices found elsewhere, the PBGKTS candidate is not only trained, but is taught and educated in every aspect of the goalkeeper position. With the power derived from the focus on a single position, coupled with techniques and innovations drawn from Paul’s indisputably impressive career, the PBGK candidate will be starting a journey that will lead well beyond “The Next Level”.